The Best Recovery Bar for Runners

The Best Recovery Bar for Runners

A few weeks ago a fellow runner brought some homemade bars to share with our group. And it was unanimous that they were so yummy. And after running 14 miles, it’s helpful to eat something with the right combination of protein, fat, and carbs. These are so yummy and they fit the criteria for a good post-run bar.

Eating After a Run is Important

Eating an adequate amount of protein after a run gives your body the amino acids it needs to repair and rebuild proteins, as well as build new muscle tissue.

General recommendations for protein after a workout is 0.14-0.23 grams of protein per pound of body weight.

Endurance activity, like running long-distance, causes your body to use more glycogen than strength training. That’s why runners tend to need higher amounts of carbohydrates.

Studies have shown that eating 0.5-0.7 grams of carbs per pound of body weight can help glycogen resynthesis.

Eat Carbs and Protein Together

Insulin is a hormone made by the pancreas that allows your body to use the glucose from carbohydrates. When carbs and protein are eaten at the same time, insulin secretion is better stimulated.

Therefore, eating both carbs and protein after a long-run can help recovery.

Generally, we recommend eating the two in a ratio of 3:1 (carbs to protein). For those of us that aren’t math-wizzes, it doesn’t have to be a perfect ratio but think of foods that have more carbs than protein.

Should you eat fat after a run?

Fat slows down digestion but research has shown that it doesn’t affect glycogen synthesis. Some research has even shown that when it’s combined with carbs and protein, it may help promote muscle growth. For example, studies consistently show that whole milk is more effective at promoting muscle growth than skim milk.

Try these bars after your next run. 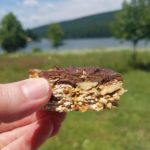 A tasty and filling post-run bar. This recipe was based off Birdseed Bars in Rise and Shine cookbook by Katie Sullivan.
Keyword bars
Servings 12 bars