Ghrelin and Weight: Calories In-Calories Out?

Ghrelin and Weight: Calories In-Calories Out?

At first glance, “the calories in, calories out” out equation looks simple enough: eat less, move move, and you’ll be in a negative energy balance. Which, is why diets work… maybe.

But it’s not that simple. Weight is affected by more than just calories. By focusing strictly on the simple equation, you might find yourself in a continued state of unhappiness towards food and body weight. In fact, research shows that the traditional calories in-calories out diet protocols generally achieve no more than a 5% to 10% reduction in body weight. And that weight loss is not maintained 90% of the time within 5 years.

What affects calories in?

A number of factors affect appetite, including hormones. Known as the hunger hormone, ghrelen is a fast-acting hormone. It’s produced and released mainly by the stomach, with small amounts released by the small intestine, pancreas, and the brain. Grehlin stimulates appetite, increases food intake, and promotes fat storage. Studies have shown when ghrelin is administered to humans, food intake can increase by up to 30%. This hormone also stimulates the release of growth hormone from the pituitary gland and plays a role in the control of insulin release. Lastly, ghrelin plays a role in reward processes.

It’s also suggested that levels of ghrelin are also controlled by types of food. And blood levels of this hormone change depending on if the food is a carbohydrate, fat, or protein. This needs further attention but preliminary data suggests that carbohydrates cause the greatest fluctuations in ghrelin levels, with sharp decreases and sharp increases, whereas proteins and fats have a more stable control. This concept is one of the reasons why fats and proteins make you feel full longer than carbohydrates.

One of the reasons I started this blog post was due to a study I read. The study, published by the American Psychological Association, demonstrated how we think about our food can impact ghrelin levels. In this research, the participants were given milkshakes on two different occasions. The milkshakes were exactly the same. But the researchers gave different nutritional facts for each one. One milkshake was identified as an “indulgent” 640-calorie shake. The other was identified as a “sensible” 140-calorie shake.

Prior to drinking the milkshakes, ghrelin levels were significantly higher when participants were told they were going to drink the “indulgent” shake. Then, ghrelin levels had a significantly steeper decline after drinking the “indulgent” shake versus when they drank the “sensible” shake. This research suggests that your thoughts surrounding your food can impact how “hungry” you feel, as well as how much you consume.

About ten years ago, legislation started to mandate that restaurants publish calorie facts on menus. Researchers wanted to know if this would impact purchasing decisions. They collected receipts and survey responses from nearly 1200 adults in low-income, minority New York communities. And although this research did not measure ghrelin and weight levels, researchers asked if the calorie labels affected their food choice. Less than 28% of the NYC sample said the calorie information influenced their buying choices. And 88% of that 28% said they purchased fewer calories in response to the labeling. Overall, the number of calories purchased did not significantly change before or after calorie labeling was instituted.

Let’s take a 20 minute drive to your favorite restaurant. All the way there, we’re talking about how delicious the french fries are and how flavorful the burger tastes. If we measured your ghrelin levels before you walked in to the door, my guess is they would be pretty high. Likely, your stomach feels empty and your mouth is salivating for that burger and fries.

You look at the menu and you see the two food items are 950 calories. Would this affect your decision to buy the burger and fries?

Altered ghrelin levels have been reported in patients diagnosed with eating disorders. And the duration of the eating disorder may contribute to the degree of hormonal changes.

What does all this mean for my weight?

Levels of the ghrelin hormone is just one component of our body shape and size. It’s a complicated component and it can’t be directly controlled with drugs or supplements.

Here are a few behaviors that can help contribute to healthy levels of ghrelin:

Bottom Line of Ghrelin and Weight

The next time you consider counting calories, consider this: it’s easy to simplify a concept to the point that it’s no longer true. Even though, it is true that a large excess number of calories can cause an increase in body size, “calories in-calories out” equation is an oversimplification of complex body system.

I just used ghrelin as one explanation as to why calories in and calories out is an ineffective way of thinking about our food and our body size. But there are so many more explanations.

Healthline – Why “Calories In, Calories Out” Doesn’t Tell the Whole Story 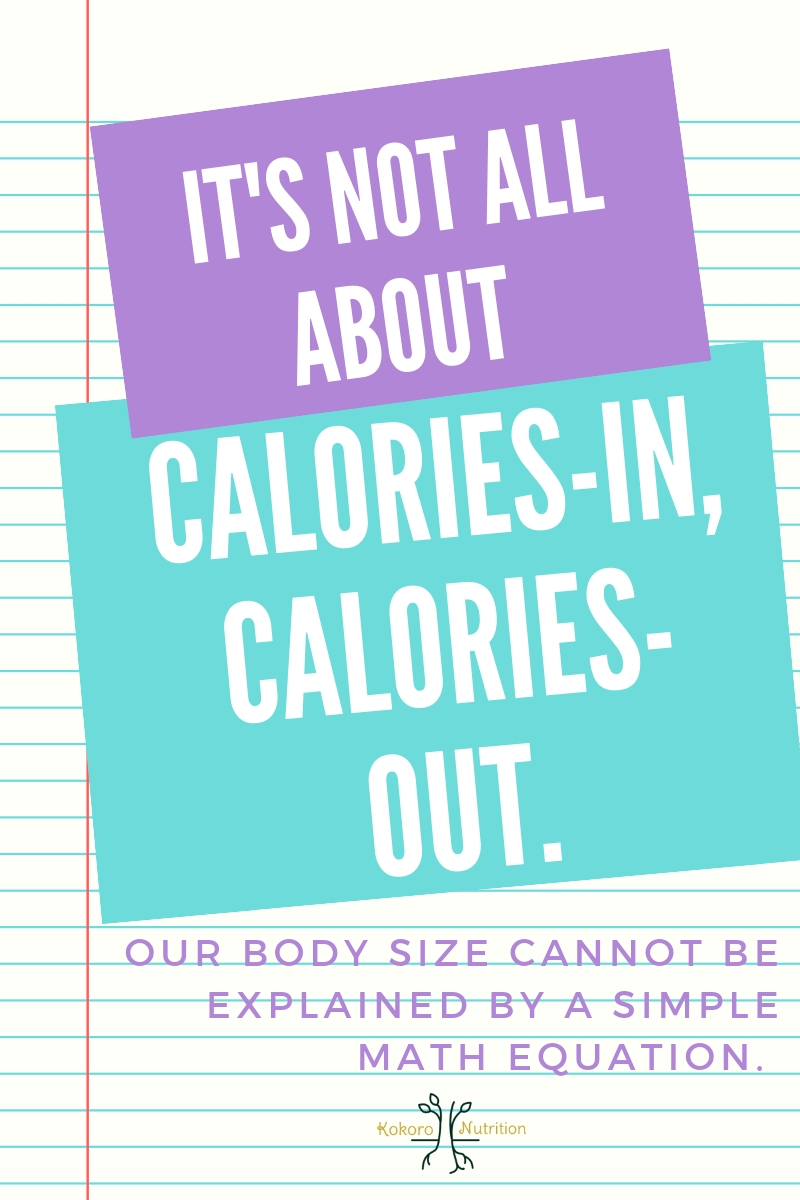