Is cheese good for athletes?

Is cheese good for athletes?

I just got back from a trip to Stockholm, Sweden, where I ate a cheese sandwich every day. Not just any type of cheese sandwich but one made from Halloumi cheese. My taste buds fell in love, even though it’s not a fancy cheese, nor had I tasted it before my trip! Maybe you love cheese too, but avoid it since the so called nutrition experts deem it as a “bad food”. With my love of cheese and trying to clear cheese’s name, here’s everything you ever wanted to know about cheese. Settle in and read why cheese is good for athletes.

I think it’s important to understand the basic steps of how cheese is made because it highly affects the nutritional profile, flavor, and textures of cheese. It involves six steps:

There are a variety of cheeses and the different types are based on how it’s made, appearance, aroma, and taste.

Cheese is the oldest way of preserving the nutrients in milk, and is essentially a concentrated form of milk. It’s a complex food made from four basic ingredients: milk, salt, starter culture, and rennet. Even though the ingredients may look the same, there are many different ways to adjust the basic recipe. The variance in aging, type of milk, type and breed of animal, the season and geographic location of where the milk comes from, the health and nutrition of the animal, and manufacturing processes changes the nutritional content for each type of cheese.

The moisture content of cheese is a common method of classifying cheese. There are not hard boundary lines between these categories, and some cheeses may move between categories depending on the length of ageing. As expected, compared to milk, cheese is reduced in moisture by about 50%.

Casein and whey are the two major proteins in milk. During the cheese making process, whey separates from the cheese, and casein becomes the major protein in cheese. Casein forms the structural matrix that traps in the moisture and fat. And make cheese stretchy and allows it to melt so well. Compared to milk, the fat and protein concentration in cheese increases by about 10%.

Casein is a high-quality protein with all of the essential amino acids. It also is considered a slow protein, which means it stays in the stomach longer than other types of proteins. One study published in the American Journal of Clinical Nutrition found consuming casein protein results in increased satiety because it takes longer to digest. The slow digestion process helps provide a trickle of amino acids into circulation over a longer period of time.

Whey is a by-product of the cheese-making process. It gets used to make a whey cheese and some processed cheese has it added back in. In contrast to casein, whey protein is considered a fast acting protein and gets metabolized faster than casein. The fast acting metabolism provides a faster influx of amino acids into the blood stream. This is one of the reasons whey gets used in protein drinks.

Since cheese is primarily made of casein protein, cheese isn’t an effective pre-exercise food. And immediately post-exercise, your muscles need a quick protein so something with whey would be more effective. Instead, cheese is a good food during times of inactivity.

Protein content in cheese varies depending on the type of milk used and the aging process used. And the harder cheeses tend to contain more protein per serving. 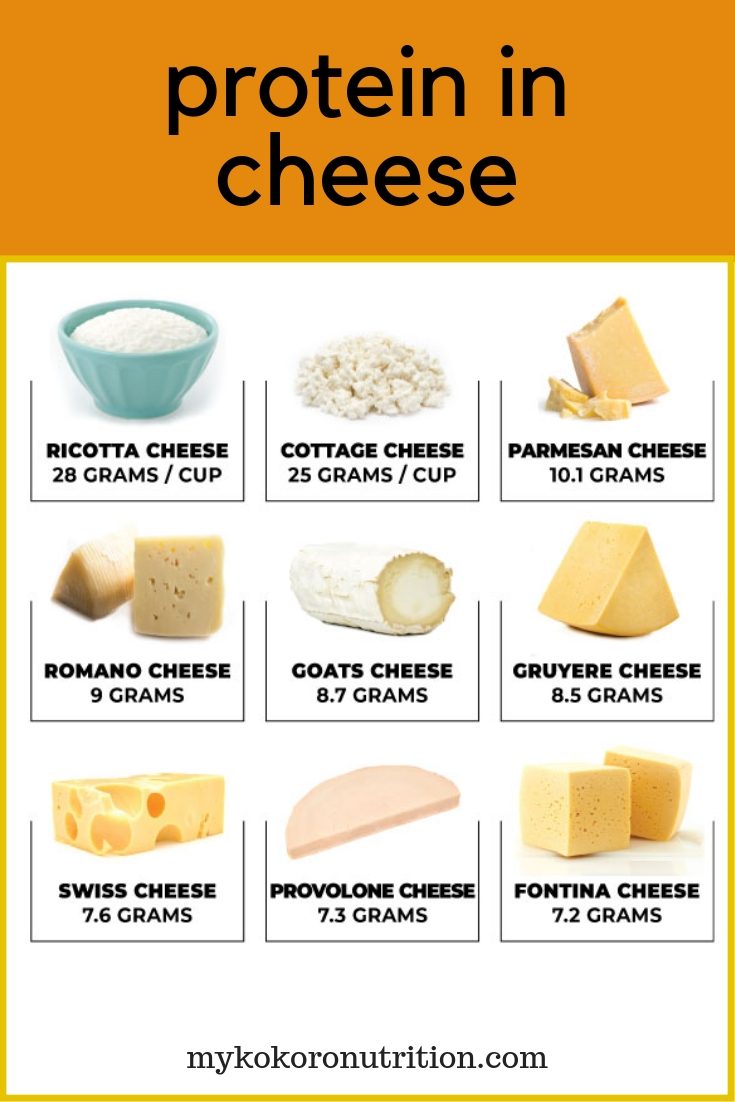 This is where cheese gets a bad name. Thanks to the saturated fat. The word saturated here refers to the number of hydrogen atoms attached to each carbon atoms. Fat is strong and solid because carbon atoms are maxed out.

The initial argument against cheese and its saturated fat is it raises cholesterol levels. However, more and more research shows that saturated fat does not negatively impact cholesterol levels. A study from 2015 found no relationship between eating full-fat dairy products and heart disease after the age of 55 and found that the individuals who ate full-fat dairy products were less likely to die of a stroke. This study followed participants for 22 years and reviewed the long-term exposure to saturated fats. A meta-analysis of 29 different studies published in 2017 showed no connection between dairy intake and heart disease or death of any kind.

A study published in the journal Circulation suggests that individuals who consume full-fat dairy weigh less and are at lower risk for developing diabetes than those that consume low-fat and non-fat dairy. Researchers from Tuft University looked at the blood of 3,333 adults during a 15-year period. They found individuals who ate full-fat dairy products had a 46% lower risk of getting diabetes during the study period.

Fresh, unripened cheeses, like cottage cheese, are low in fat. And surface-mold-ripened cheese, such as Brie, contain a higher proportion of fat and protein to water.

Salt finishes the main transformation of liquid milk to solid cheese and serves as a natural preservative. It controls moisture, improves texture, and enhances taste. The amount of salt impacts the cheese firmness, flavor, safety and preservation and is essential to good cheese.

Despite the fact Americans love cheese, cheese contributes to about 8% of American’s sodium intake. The rest comes from other sources, like canned foods and processed foods.

Sodium is essential for fluid balance and normal functions in the body. And low-sodium and high-sodium diets are linked to elevations in blood pressure. Researchers from Penn State University report cheese is a better choice than other sodium-laden foods. It may actually provide antioxidant protection for the heart. Participants who ate a lot of sodium in cheese had better blood flow than the participants who ate equal amount of sodium from non-dairy sources. Further research is needed. But overall, sodium from cheese doesn’t appear to be the culprit behind high blood pressure and heart disease.

While a variety of individual cheese manufacturers that make cheese may commit to a reducing salt use in cheese-making, it doesn’t make sense to put a blanket sodium reduction on all cheeses. For example, Swiss cheese naturally has a low level of sodium. A blanket reduction of 25% could negatively affect taste and texture. 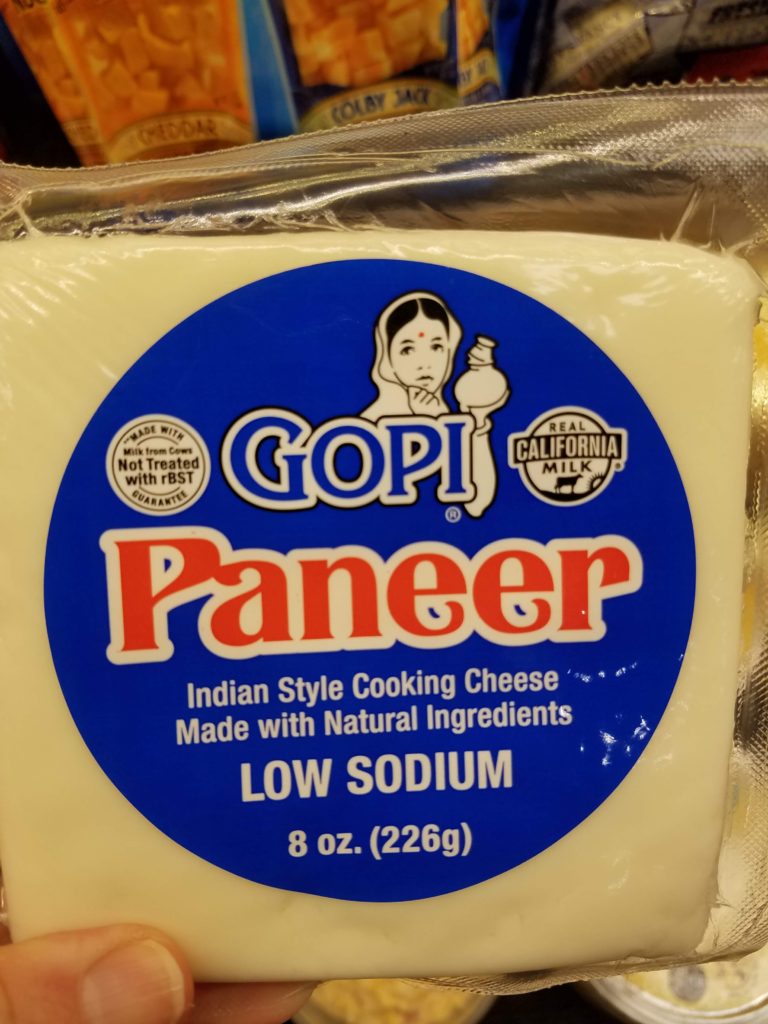 Calcium concentration has a major impact on the final properties of the cheese. The concentration of calcium determines the softening, melting and flow characteristics of cheese. It also affects the pH, the protein level and moisture content in cheese.

For these reasons, calcium is closely monitored throughout the cheese making process.

The reason it can be difficult to digest dairy is either a lack of or not enough of the digestive enzyme called lactase. Lactase breaks down lactose into more simple carbohydrates, glucose and galactose. Not enough lactase means lactose molecules end up in your colon, producing gas and diarrhea.

While the nasty side effects of dairy might make you want to all types of cheese forever, that’s not always necessary. Aged cheese might be OK for those lactose intolerant. Enzymes used in the cheese making process break down lactose more and more over time, so cheeses that have been aged at least 6 months have very little lactose in them. That’s why aged cheese is less sweet than the softer cheeses, which have much more lactose in them.

According to Steve Carper, author of Milk Is Not For Body: Living With Lactose Intolerance, there are nine cheeses that are about 2-3 percent lactose (whole milk is around 4.8% lactose).

America’s love for pizza means mozzarella cheese is the most popular cheeses in America. Processed cheeses (American) is second. But they shouldn’t be, with so many different types of cheeses out there. If you’re ready to explore new cheeses but don’t know where to start, check out this article in Vine Pair, offering a “if you like this, try this” list.

Is Cheese Good For Athletes?

Unless you have an intolerance or allergy to cheese, cheese has a lot going for it and deserves a place on the plate. Whether you choose to eat some cheese every day to help keep your heart and bones healthy, or because it’s delicious, a little goes a long way.