The idea of fasting isn’t new. It has been a religious practice for centuries and many believe it has potential health benefits. But should runners run in a fasted state? Should athletes include days of fast in their week?

Likely, if you know me, you’d probably be able to guess my personal opinion on this nutrition practice. But in respect of science, I’m leaving my personal opinions out of this and went to search the archives for peer-reviewed studies on this topic. I also asked my running team for their personal experiences with running and fasting.

Some religions practice fasting as a religious ritual, one being Mormon. Since I was raised Mormon, I am quite familiar with the fasting practices of this specific religion. Members fast for three meals, one time a month. Other religions, such as Muslim, practice different fasting protocols.

So why is fasting being intertwined into runners and athlete’s nutrition plans? Why has this practice become a hot topic among runners? And is there any truth to the health claims?

What the Research Says on Fasting for Runs

I found a number of scientific studies conducted on intermittent fasting in general. But many use animal subjects, not human participants. Animal studies can be useful in guiding human behavior, but not always 100 percent valid for everyone. And the few studies that were conducted on runners had small sample sizes.

A study published in the British Journal of Sports Medicine concluded that Ramadan fasting has a negative impact on runner’s endurance performance. Although, this was a small study, it provides good insight into the effects of long-term fasting on running performance.

Researchers in 1991 utilized fed rats and fasted rats to explore effects of fasting on exercise endurance. And they concluded that metabolic responses to fasting depends on a number of factors including the fact that they used rats, instead of humans. They also suggest that the age of the animal and the duration of the fast probably determine metabolic responses.

A 2010 study  in the Journal of Science and Medicine in Sport is often used to support fasted running. Participants were divided into two groups: one group rode the bike after fasting overnight, while the other group rode the bike after eating breakfast. The results were not significant for women. Although, men in the fasted group had a greater increase in aerobic capacity (ability of the heart and lungs to get oxygen to the muscles) and resting muscle glycogen content at the end of the study. But the study was conducted on untrained cyclists, which may not have much relevance for runners.

One runner says the biggest change was not directly related to her running but in her weight. This runner says when she ran fasted, she lost 20 pounds during her training cycle, which she experienced the opposite during previous training cycles where she had gained weight. She became interested in running fasting after seeing her running coach train for a 50 miler while fasting.

She noticed with carbohydrate loading or even just eating during my runs she felt she would have to continually replenish with calories or sugar. Her muscles would feel very dense and she would hit the dreaded wall. She shares she has rarely ever feel that way with fasted running and has run up to 20 miles, feeling well, with no food.

On the opposite side, another runner reports having the opposite experience.  She shares when she fasted during her runs, she would have episodes of passing out. She started fasting in order to shed weight. But realized that the negative side-effects of long-term fasting were far greater than the pros.

A third runner’s experience does not support running fasted. As with the other two runners, she tried fasting in order to lose weight. She did experience weight loss but her running performance decreased. She said she was much slower and she didn’t enjoy going out for her runs, especially if she was at the end of a fasting period.

Another runner shared that she participates in running and working out in a fasted-state only during shorter, easier workouts. She shared typically these are sessions done in the early morning before breakfast. But she believes that the training must be easy.

The last runner’s experience also did not support fasting for running performance. She shared that it was challenging because everyone else would be eating and she would have to restrict. She felt herself mentally thinking about food all of the time. 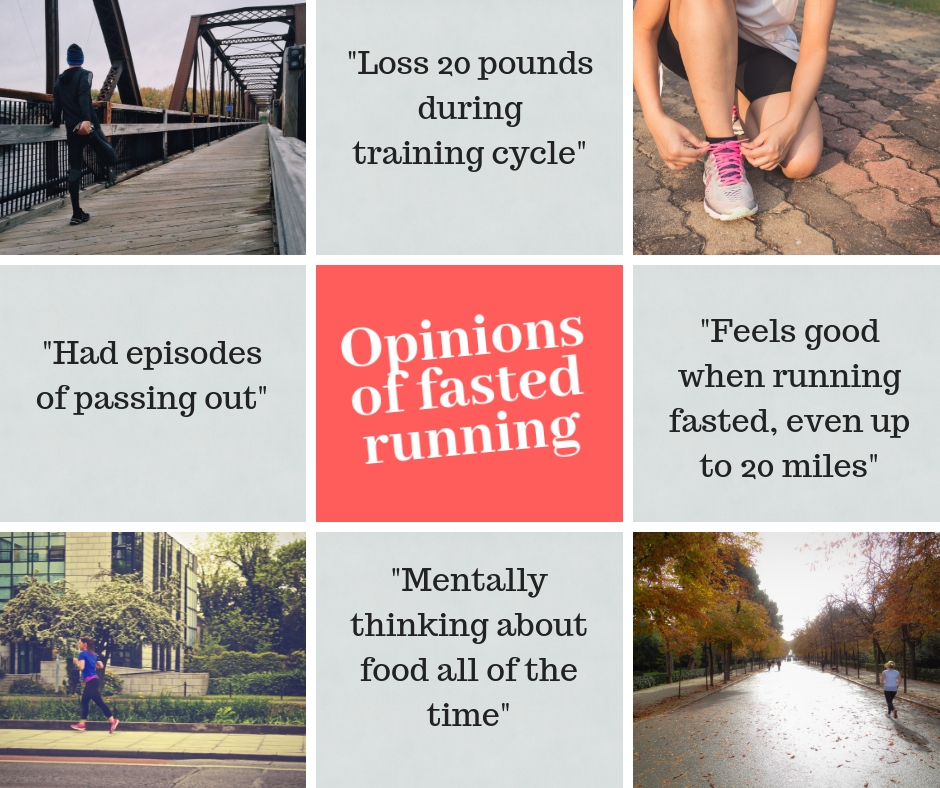 The research is very limited. Researchers need to conduct further research with larger groups of human subjects. And the anecdotal experiences shared with me were somewhat mixed but primarily against fasted running.

Considering the limited research on this diet, I would caution runners before adopting fasting protocols for training, especially for longer runs and higher intensity sessions.

I would also highly caution runners from using this type of diet if they have past history of obsessive behaviors, disordered eating, or struggle with consuming enough calories. And keep in mind that this is a type of diet. If you are forcing yourself not to eat to lose weight, please know that is not a long-term solution.

There are many other blog posts on the internet about runner’s experiences with fasted running. Many are in support of the diet and share how they feel it has helped with their own running. But my collection of anecdotal experiences did not provide a lot of support for the diet. Overall, as with many restrictive diets, I think the cons outweigh the pros.

What to eat before a run?

Even if you practice fasted running, finding the right foods to eat before a run is important to your overall running success. This cheat sheet of what to eat can help you figure out how to maximize the foods you eat.

What is your opinion? Have you tried fasted running?