6 Ways to Raise a Child to be an Intuitive Eater

6 Ways to Raise a Child to be an Intuitive Eater

My son woke up this morning at 5:15 a.m. and his little belly was growling loud and clear. And to support those hunger noises, he instantly reported to me that he couldn’t sleep anymore because he was hungry and he needed fuel. As a 3-year-old he has learned that when he feels hunger he needs food. He doesn’t track calories, know how much a “normal” serving size is, or think that eating chocolate for breakfast is a bad thing. He just knows that he wants food. And it has to be food he likes.

His relationship with food is uncomplicated right now. And I want it to stay that way.

But I’ve noticed that in my efforts to help him develop in a healthy way, my fear of him developing an eating disorder, and my constant conversations about food, I might be complicating his relationship with food. I keep asking myself am I raising an intuitive eater?

And in conversations with adults, somehow our relationship with hunger gets a little fuzzy. We resist our hunger. Adults act as if hunger is some pathological process that should not be happening and something we should have self-control over.

Knowing how to raise a son who keeps his intuitive sense of hunger or fullness is hard. So I’ve been looking to the experts and reacting to my son in different ways.

Here are 6 ways to raise an intuitive eater:

Respect the fact that kids do not always eat the way we want them to eat.

As I’ve learned with my 3-year-old, he’s not going to eat something just because I say it tastes good or because it makes you grow healthy and strong. He’s going to eat it when he’s ready. To us adults, it feels like the child is just being a picky eater for no apparent reason. But for the child, the food may seem scary and unfamiliar.

And again as adults, our typical response is to say, “How do you know you don’t like it if you haven’t tried it?”

In a brainstorming session I had with another RD about this topic, we came up with the thought that perhaps when adults say this, the kid is thinking, “why would I try a plate full of bugs.”

So as the parent, it’s our job to respect them and to support them through mealtime. I like the question that Sarah Remmers posts, “What can we do to make this meal yummier for you?” But this question only works if you respect their response.

Ask for their opinion and input.

I make our dinner menu each week. And I’m learning to include him in this process. I know it takes longer and often tests my patience but he’s starting to connect the dots between recipes and dinner.

Last week for his birthday, we asked him what he wanted. He told me macaroni and cheese. This is a challenging dish for us to make because of my husband is dairy intolerant. So we searched the internet for a dairy-free mac & cheese recipe and found a butternut squash mac & cheese recipe. At first he wasn’t sure about it because it looked different. But after I reminded him he helped choose the recipe so daddy could eat it, we had no more complaints.

I have also learned that too many options can inhibit a decision. Since we all eat breakfast at different times, I try to give my son choices. I’ve learned to limit it to two main choices. It’s either this or that for breakfast. He enjoys getting to chose and usually a lot less tears.

Don’t use food as a parenting tool.

It can be so hard to resist using food as a bribe or for punishment because it works. It’s an external motivator that is easy to use. But a recent study demonstrated that when parents used food as a reward or a consequence, the children ate more when from snack foods, even when the children reported not being hungry.

There’s a lot more research that shows that when parents use food as a parenting tool, kids form negative associations and relationships with food. When food is used for things like bribes, distraction, rewards, praise or punishment, a negative association might be created between a particular experience and food. When this relationship and connection occurs over and over, the risk of disordered eating goes up.

Instead, leave food out of the discipline equation.

Expose them to foods over and over.

How many times did it take you to like something new? Maybe once, maybe several times. I mean, we’ve all heard that even coffee is an acquired taste. Whether that’s true or not, I don’t know but I do know that it can take consistent exposure to a food for our children to start eating something. Research shows that repeated taste exposure and modeling of behaviors in non-coercive fashion has shown to increase food acceptance.

One essential component of exposure is neutral exposure. No one at the table is saying, “just take one bite” or “don’t you want to eat it like everyone else”.

So even though you’ve green beans on your child’s plate several times without him trying it, there’s lessons to be learned here. The child learns that it’s OK to not eat everything on their plate. Now the child learns that the food is harmless. And it becomes a normal food.

On Super Healthy Kids, a writer posted that it took 8-10 years of exposing her children to salad for them to start eating it.  As she says, the bottom line is not to be frustrated and to be patient.

Trust the amount your child is eating.

The amount of food that my son eats goes up and down. Some days it seems he barely eats anything, while other days, he asks for more and more. Not only can these inconsistent amounts feel weird, it’s difficult to trust that they are eating enough. Trust the process that when you offer food consistently, the child will regulate how much food they want and need. One study reviewing middle school aged children found that children who scored higher on the intuitive eating scale had lower BMIs, less body dissatisfaction, and fewer thoughts about being thin.

Discuss these principles with other adults who interact with your children at meal time.

My child goes to an in-home daycare so for lunch and snacks, I have to trust her and my son’s decisions for mealtimes. I’ve struggled with this one but have found that as I have more conversations with my provider, she’s open and appreciates our conversations.

So tell me, what are you obstacles in raising an intuitive eater? What strategies are you using to help your children grow up with a healthy relationship with food? 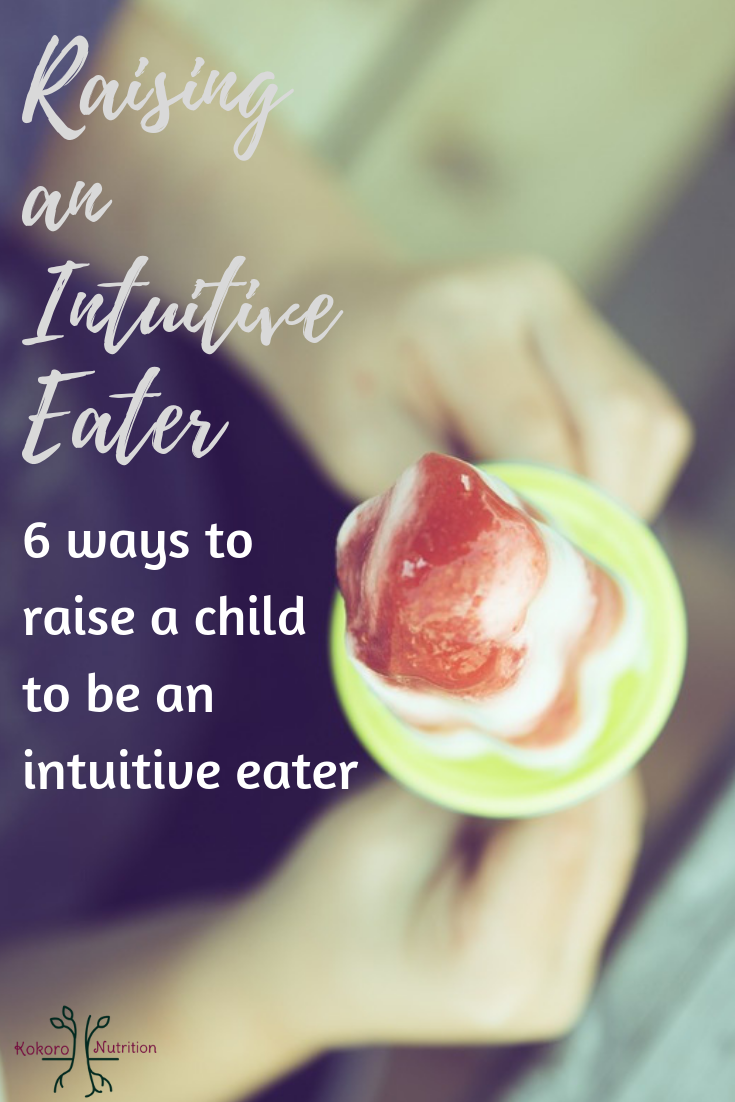